The tremendous world I have inside my head. But how to free myself and free it without being torn to pieces. And a thousand times I’d rather be torn to pieces than rather it in me or bury it. That, indeed, is why I am here, that is quite clear to me.

As a reaction to the exhausted modernism and postmodernism, so-called metamodernism brought some new orientations and artistic practices that found their echo especially on Slovenia’s literary scene, while this phenomenon was less noticeable in the visual arts although this field, in the last twenty years, has also developed clear outlines of the new figuration gravitating, along with other contemporaneous expressions, towards the so-called metaromanticism whose typical characteristic is that it puts sensuality before the social and political context of contemporary art and sublimely explores the paths to new utopias of the (unreachable) future … turning the definite into the indefinite. The aim of this exhibition was to find the works and representatives of this movement in Slovenian painting and place them in the context of the current developments in Europe and worldwide. The available space allowed for the presentation of selected large-format works by eighteen authors, although the initial selection included several more names that could not be included in the exhibition because of different circumstances. The exhibition thus features works by Igor Banfi, Bojan Bensa, Matej Čepin, Mitja Ficko, Jernej Forbici, Boštjan Jurečič, Simon Kajtna, Narcis Kantardžić, Barbara Kastelec, Aleksij Kobal, Gani Llaloshi, Robert Lozar, Silvester Plotajs Sicoe, Nataša Ribič Štefanec, Apolonija Simon, Natalija Šeruga Golob, and video works by Nataša Prosenc Stearns and Ksenija Čerče.

With the domination of the internet mass media in the last twenty years, seemingly anachronistic subjective views that seemed to be a thing of the past reappeared in painting. Uncertainty and doubt associated with debates about the authenticity or falsehood of virtual reality gave rise to the desire to use historical models in which the subject and the material form were integrated into an organic whole. Painting has responded to the fluid ‘immaterialism’ of new, digitally generated images, and increased the interest in material, physical aspects of the image. The expressivity of a painter’s brush stroke signifies the return to the aura of painting and to the “myth” of the so-called own expression. It is directed against the triviality of popular culture and speculative, often populist opening of the field of the visual arts to different interdisciplinary fields.
The exhibition that borrowed its title from the often-quoted thought by Franz Kafka focuses on the works of selected Slovenian painters oriented towards oneiric, mnemonic ambiences of imaginary landscapes. Although these landscapes ring familiar, they cannot be identified and are, as a rule, populated by ambiguous objects of undefinable and freely reshaped cultural provenance. In the foreground is the materiality of the painting structure, which represents a fertile humus for a constant resurrection of forms, their circulation and trembling in an intense and materially rich painting membrane, which formally and beyond meaningful emphases first rises to the spheres of metaphoric address in the sense of a hymn to creation and the beauty of creation. The noble colouring that prevails in large-format paintings underlines the palimpsest structure of the meditative image surface into which a solitary figure is immersed (or not). Contours and colour stains merge into solid, mimetically recognisable shapes that, in the suggestive play and anti-play of sensitive, colour surfaces in the same compositional swing decompose into wispy, vanishing phantasms of objects from the real world. The brush trail sooner or later reveals that particular kind of joy that anyone with some visual talent discovers, without any tangible incentive, in the phenomena of the visible world, transformed here – which is essential – into mysterious psychic landscapes. This is the place of origin of these paintings, while renditions, to put it generally and simply, originate from pure conditions of painting insofar as they follow the emotions of inner experience. 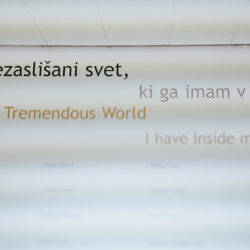 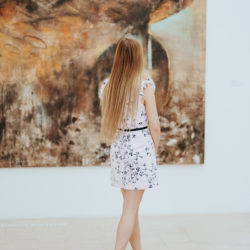 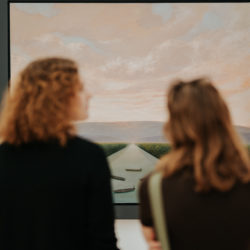 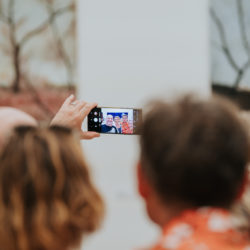 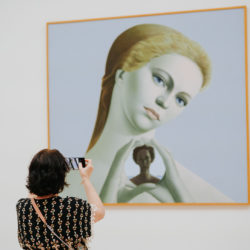 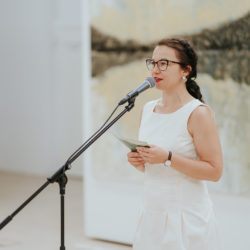 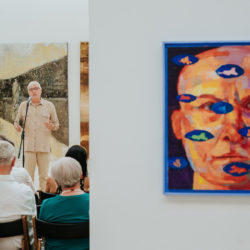 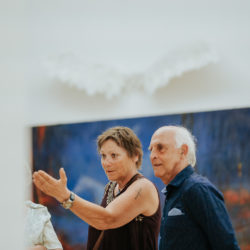 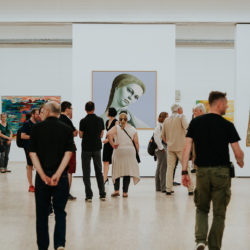 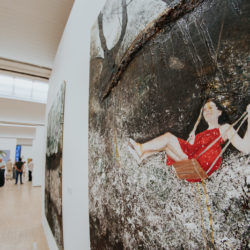 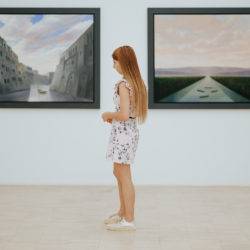