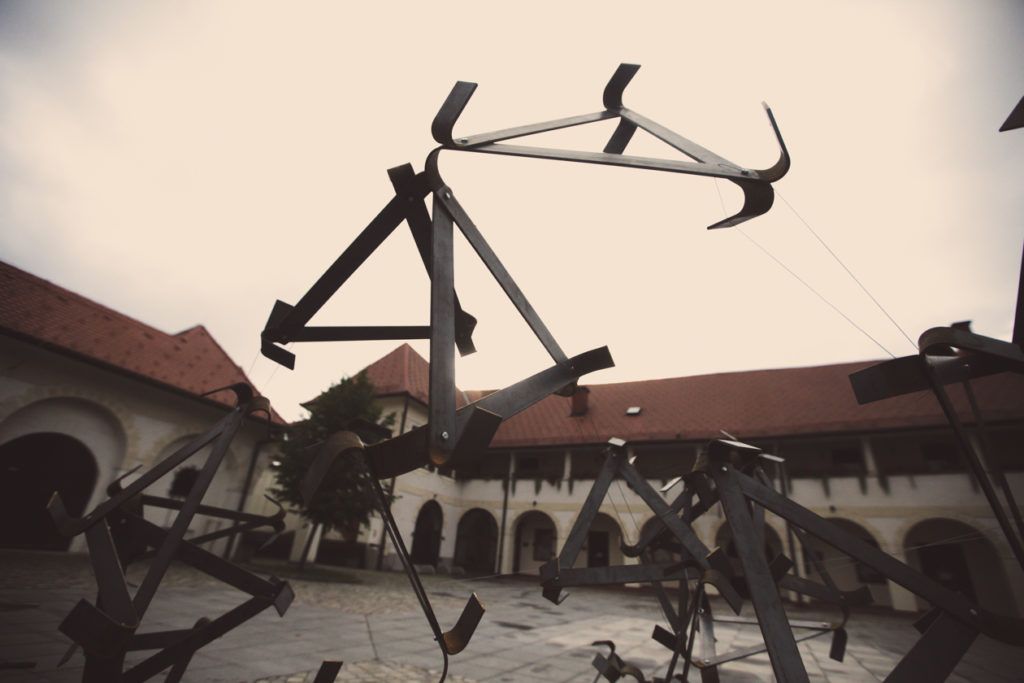 The idea of the residency is related to Slovenj Gradec’s title of UN Peace Messenger City, which was conferred on the city back in 1989, and is also connected with the exhibitions and various activities of the museum, which today is known as the Museum of Modern and Contemporary Art Koroška. The museum was established in 1957, and throughout the 1960s, 70s and 80s the museum hosted large international art exhibitions that put the institution on the national as well as international art map. These exhibitions worked to promote values such as peace, solidarity and understanding among nations. Today we look back at these activities in terms of their historical context, and at Yugoslavia as part of the Non-Aligned Movement. This past remains important, and bears an important message – that art can raise awareness and bring to light certain topics, views and approaches – that constitute an integral part of the general, ongoing discourse. Art Claims the Streets is the title of the artist residency taking place 11–16 September. Five artists from five different countries will conceptualize works for public space focusing on the geo-political and social processes connected to the subject of migration. The invited artists are asked to develop works around themes like humanity, peace, and war, and at the same time to raise the question of individual responsibility towards one’s fellow human beings. The Art Claims the Streets art residencies are part of the larger project My Town is Your Town. The project is a collaborative effort between Slovenj Gradec, Hauzenberg and Vöcklabruck, and run by the Museum of Modern and Contemporary Art Koroška in collaboration with SPOTUR and the municipality of Slovenj Gradec. The project is supported by the Europe for Citizens – Town Twinning programme.

Lana Čmajčanin (1983, Bosnia and Herzegovina)
Lana Čmajčanin graduated from the Academy of Fine Arts, Department of Sculpture, University of Sarajevo in 2007. Currently she is a PhD candidate at the Academy of Fine Arts Vienna. Her work comprises installations, video-works, performances and sound installations. Čmajčanin’s socially-engaged artistic practice is often situated in and incorporates strong references to a specific place, the surrounding political framework, and more widely also deals with women’s roles and the female body.

Stella Felder (1954, Austia)
Stela Felder grew up in Attnang and Vöcklabruck. She graduated from the Pedagogical Academy in Linz and has taken many art courses and classes with a number of artistic mentors. She is a member of several art associations, among them the Attergau Color Circle, Hausruckviertler Kunstkreis and Academie des Arts Europeen. Stella works largely in painting.

Clemens Hutter (1985, Germany)
Clemens studies sculpture and painting at the Art Academy in Nürnberg. Since 2014 he has been a member of the Berufsverband Bildender Künstler Niederbayern art association. Clemens works largely in steel, and through his work explores the material and its myriad possibilities.

Artur Magrot (1985, Czech Republic)
Artur Magrot attended the Secondary School of Art and Design of St. Agnes of Bohemia in Český Krumlov, focusing on stone sculpture and photography. Since 2014 he has been studying at the Academy of Fine Arts in Prague at the Studio of Intermedia Work. He is the founder of the experimental street-art project Ukradená galerie (The Stolen Gallery) and focuses on site-specific actions and interventions in public space.

Jure Markot (1985, Slovenia)
Jure Markota graduated from the Academy of Fine Arts and Design in Ljubljana, department of sculpture in 2011. Since then he has also been studying at the Faculty of Architecture. Jure works in various art fields, focusing on site-specific settings that deal thematically with current social issues.