France Mihelič (1907, Virmaše pri Škofji Loki – 1998, Ljubljana), Slovenian painter, printmaker and illustrator, studied painting at the Academy of Fine Arts in Zagreb between 1927 and 1931. After completing his studies, he worked as a teacher of Art Education in Kruševec and later in Ptuj. During World War II, he joined the Partisans. In the years 1945–1970, he was a professor at the Academy of Visual Arts in Ljubljana. He received many awards for his work, among them the Jakopič Award (1978), and three times the Prešern Award (1949, 1955, 1965). He was one of the most important artists of the mid-20th century in Slovenia, who, starting from a pre-war realistic foundation, developed his individual form of poetic fantasy after WWII as a result of personal and historical circumstances. Through it, he expressed his own experience of the world by innovatively combining form and contents. He was most remembered by his contemporaries for his images of the numerous metamorphoses of the figure of Kurent, the Ovidian characters from Antiquity and monstrous creatures, through which he sensuously connected the inclinations of a paganist primordial life with contemporary feelings of existential dread and the awareness of transience. 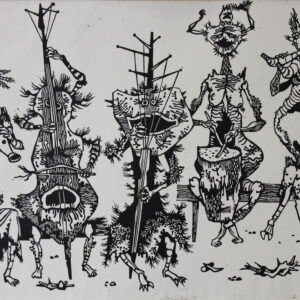