Ivan Meštrović (Vrpolje, Slavonia, 1883 – South Bend, ZDA, 1962) spent his childhood in Otavice in the Dalmatian region of Zagora. Between 1910 and 1906 he studied in Vienna, where he met Auguste Rodin. Before and during World War I, he lived in Paris, Rome, Venice, Belgrade, Geneva and Cannes. After returning to his homeland, he took the position of Professor (1922) and then Rector (1923) of the Academy of Fine Arts in Zagreb. During World War II, he moved to Rome in 1942, and then to Switzerland the following year. In 1947, he moved to the USA, where he was a professor of sculpture at Syracuse University, and at the Notre Dame University in South Bend from 1955. In 1947, he was the first living artist to have an exhibition at the Metropolitan Museum in New York. His works are kept by the Ivan Meštrović Gallery in Split. During his lifetime, he created an enormous oeuvre of sculptures and, with his monumental sculptural works, he became one of the most prominent artists of the first half of the 20th century. 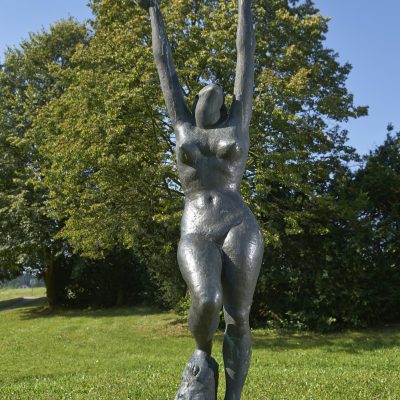