Jordan Grabul(o(v)ski) (Prilep, 1925 – Skopje 1986), one of the initiators of modernist sculpture in Macedonia, started to attend the High School of Fine Arts in Skopje in 1945. In 1952, he graduated from the Academy of Fine Arts in Belgrade under the mentors Lojze Dolinar and Sreten Stojanović. In Skopje, he founded the group Denes in 1953. In the subsequent years, he aimed to realize through his work the group’s program of a synthesis between art and architecture. He is the author of several monumental memorials, which span from realism to associative geometricism in terms of style. In 1974, he and his wife Iskra (Spirov) Grabul created the memorial Ilinden in Kruševo, known also under the name Makedonium. Besides solo exhibitions, he also participated in numerous group exhibitions in Macedonia and abroad, and received several significant awards for his work. 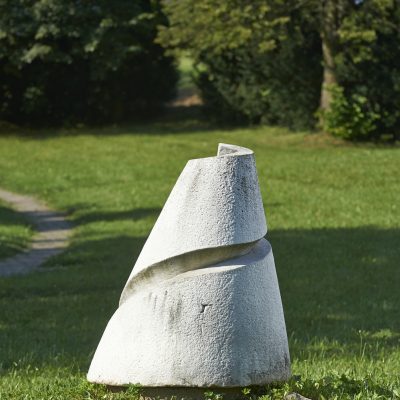