Julian Pacheco (1937–2000), born in Cuenca in Spain, moved to Barcelona in the ‘60s. He was interested in the works of artists such as Antoni Tàpies, Max Ernst, Hans Hartung, Eugène Kurakín … His early interest in engaged positions is further revealed by the fact that Pacheco was also interested in the activities of the Catalonian group Dau al Set – El Paso, which was formed as a response to Franco’s nationalist, conservative and propagandist art, and aimed to revive the avantgarde scene in Spain, initially by strongly leaning on the Dadaist and Surrealist traditions.

In terms of motifs, the works of Julian Pacheco express a strong criticism of the political context of Franco’s Spain, for which the artist was exiled for many years, first in Paris and later in Italy. In exile, he made connections with the Dutch activist group “Provo” that advocated for pacifist and anarchist ideas, and sexual liberation. From 1967 onwards, Pacheco’s works are extremely satirical and criticize Franco, who appears in the form of a bird of prey in his works. In the early ‘70s, he formed the group Denunzia together with Antonio Miró (1944), Eugenio Comencini (1939–2015) and Bruno Rinaldi (1934). Their works depict the motifs of violence, images of camps and political oppression. The group Denunzia participated in the exhibition Peace 75. In 1979, Pacheco moved back to Cuenca, where he lived until his death. 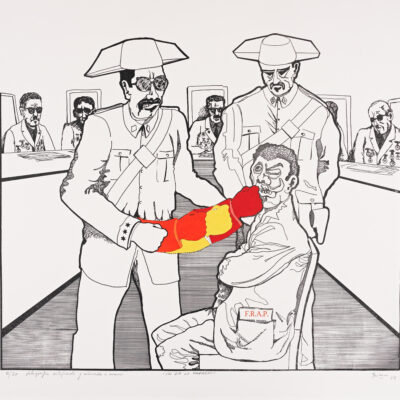