Peter E. Clarke (1929, Simon’s Town – 2014, Ocean View) is considered one of the most important South African artists, who worked both in the fields of painting and printmaking as well as literature. His path towards recognition during the time of Apartheid in South Africa was all but easy. In his youth, he had no opportunity to get an education in the field of art, but he was creating all the time while performing hard labour as a port worker. His works were eventually noticed, but only after he was included in several exhibitions did the University of Cape Town allow him to enrol and study printmaking. During the period of 1962/63, he studied printmaking at the Rijksakademie van Beeldende Kunsten in the Netherlands, and in 1972 he was a victim of forced relocation to the city of Ocean View. He was a quiet chronicler of the South African community’s life, and he received several important international and national awards for his works in the field of visual art, in which he often critically observed the social reality of the time. 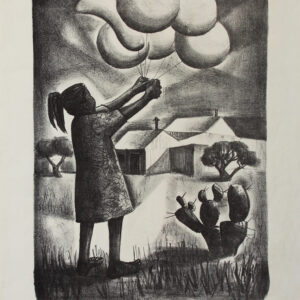