Makoto Ueno (1909, Kawanakajima, Nagano prefecture, Japan – 1980) was born as Makoto Uchimura, and he took his wife’s family name in 1936. In 1931, he started studying at the Tokyo School of Fine Arts, but he never completed his studies as he was arrested due to his involvement with the democratic movement. He studied woodcut printing with Hiratsuka Un’ichi for five years. He was strongly influenced by the works of Käthe Kollwitz, which were widespread among printmakers in China and Japan at the time. Before the war, he worked as a teacher at an elementary school in Tokyo and a high school in Kagoshima. After the war, he remained loyal to his leftist beliefs and he exhibited in many countries around the world. In 1949, he was one of the founders of the group Nihon Hanga Undô Kyôkai. He is famous for his series of woodcuts depicting the nuclear bomb explosions in Hiroshima and Nagasaki. His works are kept by the Hito Museum Ueno Makoto gallery in Nagano in Nakajima, the Sakima Art Museum in the city of Ginowan in Okinawa, and in the Museum of Modern Art in Kamakura in Kanagawa. 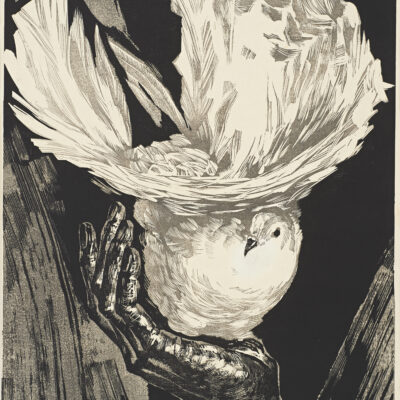