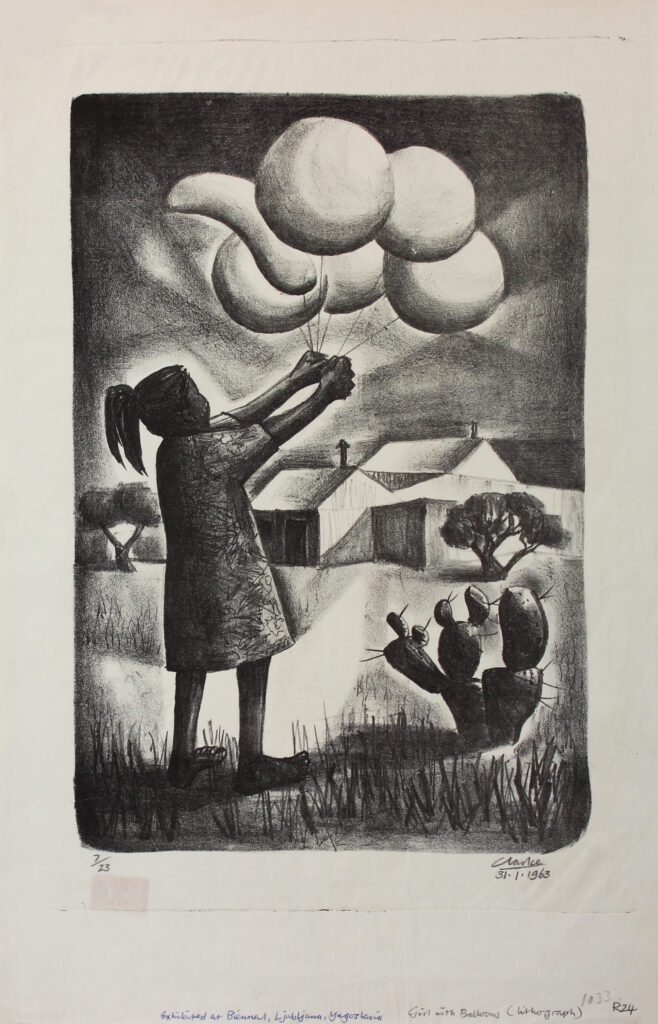 Peter E. Clarke created the print Girl with Balloons while he was still living in his hometown, Simon’s Town. In the print, we can see a barefooted girl with tied hair, who is strongly clutching a bunch of balloons. She is standing on the grass besides a road leading to some houses in the background. To her right, we see a prickly cactus, and two solitary trees in front of and next to the houses. The artist depicted the girl mainly from her back and partly from her side, so we cannot see her face. The most expressive part are thus her arms with large hands, fists clenched. They express the astounding strength and determination not to let go of the balloons. In his works, Peter E. Clarke depicted scenes from the everyday life of the black community in South Africa, to which he himself belonged, and left room for the viewers to interpret his works freely. The same goes in this case as well. The image of the girl playing with balloons on the black-and-white lithograph can be understood as a simple scene from a child’s daily life; in the context of circumstances in which Peter E. Clarke worked for most of his life, however, we can also interpret the scene as a symbolic image, with the clutching of balloons as a metaphor of happy childhood moments representing on the one hand a fear of loss, and on the other hand the strength of a seemingly fragile girl, who does not desist in her fight for what she is entitled to.

Peter E. Clarke donated the print to the Museum of Modern and Contemporary Art Koroška in 1967 during the international exhibition Peace, Humanity and Friendship among Nations, together with fourteen other prints and one drawing.