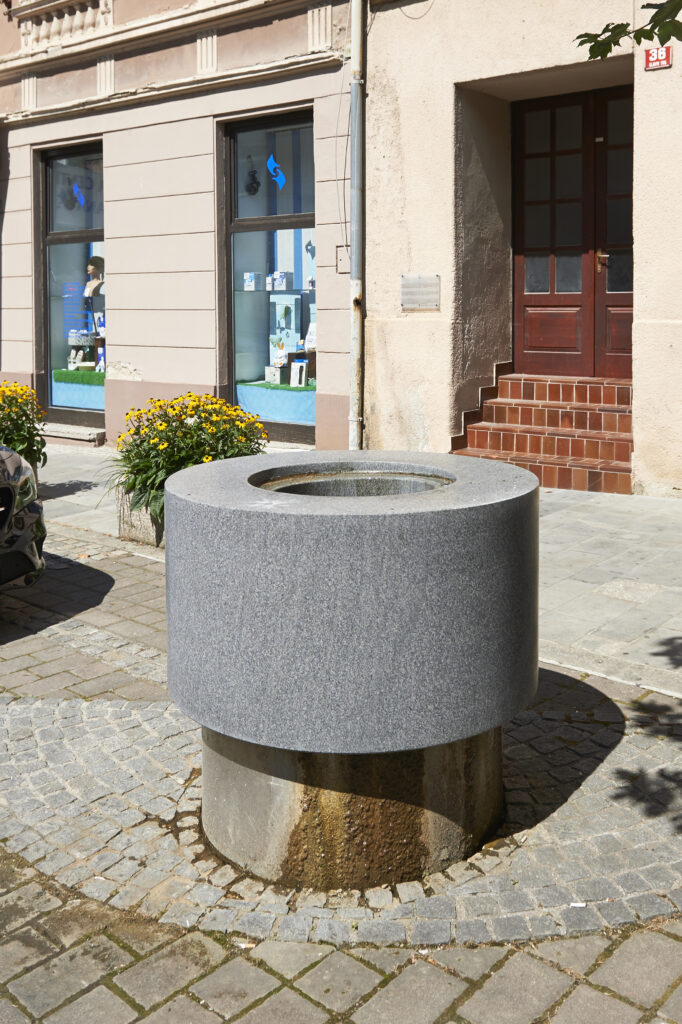 The three-part Fountain of Life (Fons Vitae) is the central memorial to the mission of peace advocacy of Slovenj Gradec as a Peace Messenger City. It is composed of three artistically and ideationally related works that are located in places where there used to be drinking water springs (the so-called “štepihi”) before World War II as well as a few years after it. Bratuša’s idea is associated with the shape of the most well-known Slovenian fountain, the Fountain of the Three Carniolan Rivers by Francesco Robba from 1751, located in front of the  Ljubljana Town Hall, which he playfully deconstructed into three basic elements, often found in fountains of the Baroque period: he shaped the bowl into which water flows into the SPRING near the Hugo Wolf House; he intentionally made the central OBELISK in front of the Mladinska knjiga bookstore, across which water also flows, from stainless steel, locally produced by a factory in Slovenj Gradec; and he condensed the figural composition into a dynamic figure, placed among passers-by on the sidewalk in front of the building of Nova ljubljanska banka. Even though the three elements of his sculptural work are visually almost unrelated, especially among the summer tree crowns in Glavni trg, this unusual solution with an integrated message actually only addresses the viewer as a whole, which also signified by the semi-circular cuts in the pedestal of the obelisk and the spring that together form a circle. In a caustic postmodern manner, Bratuša reshaped Robba’s idea into a contemporary sculptural organism, a symbol of the living water of rebirth and of a belief in a better world – a look towards the future based on the spiritual values of a civilization with a purified heart and a cleansed soul.