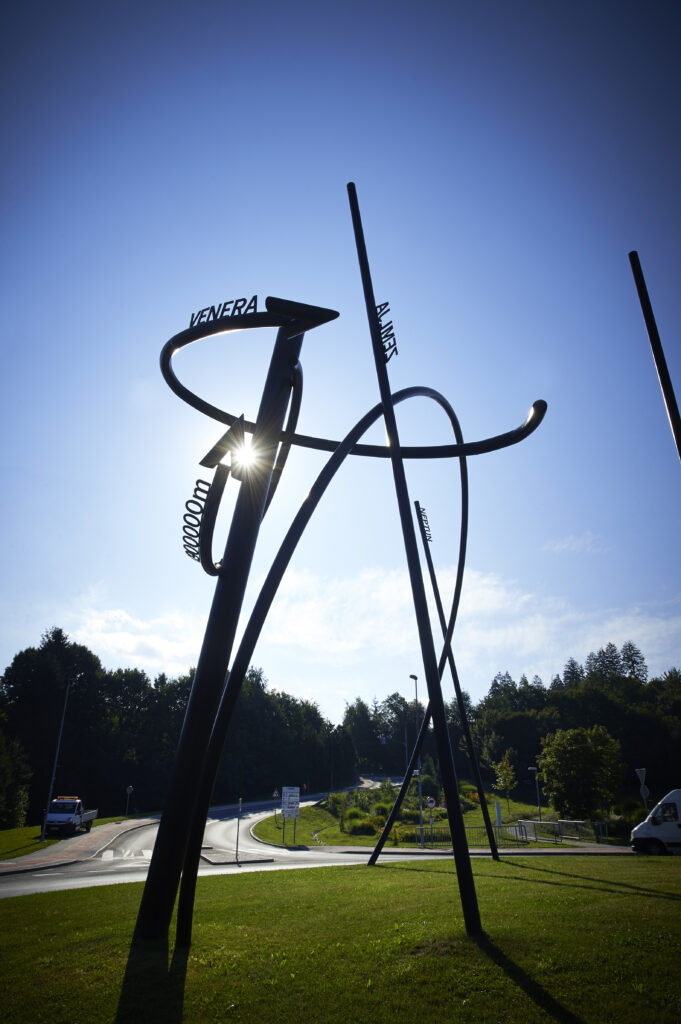 In October 2007, the City Municipality of Slovenj Gradec opened a tender by invitation to set up the roundabout on the Slovenj Gradec bypass. For the memorial, the proposed starting point was related to the life and work of Herman Potočnik Noordung, a pioneer of cosmonautics, whose lineage descends from Slovenj Gradec on his father’s side. Four prominent sculptors were invited to participate as well as an architect. Metod Frlic, Darko Golija, Edi Koraca, Naca Rojnik and Boštjan Temniker presented their draft ideas, and an expert jury selected the design with the title From Technical Daydream to a Technical Issue and Back by the sculptor Darko Golija (1965) from Maribor. The monumental composition made of metal arches completely dominates the large island within the relatively big roundabout, symbolizing the orbits of the planets of our solar system, among which the visionary Herman Potočnik Noordung positioned his geostationary station, and described the idea with all the technical details in his famous book The Problem of Space Travel (1929).

Born in Pula, where his father Jožef (born in Slovenj Gradec) worked as a doctor in the Austro-Hungarian navy. After his father’s early death, his mother and her four children moved to her birthplace Maribor, where Herman started to attend grammar school, and he moved to Vienna in 1903, where he finished secondary school, after which he completed military school in Harnice in Moravia and the Military Academy in Mödling near Vienna between 1910 and 1913. As an expert on bridge and railway building, he participated in the frontlines of World War I, including the Isonzo Front. In 1919, he fell ill with tuberculosis, so he retired and started to study electrotechnics and engineering at the Technical University in Vienna, where he graduated in 1925 and became an expert on rocket technology. He devoted his final four years before his death to the planning of space exploration.